11 Things That Are Fast Disappearing From the Workplace — Keep Up! - Senior Executive
Skip to content

11 Things That Are Fast Disappearing From the Workplace — Keep Up!

The pandemic hastened the departures of many technologies and business practices already on their way out. See what's not coming back.

The business world never stands still. Technology and practices that once were taken for granted often disappear over time. When was the last time you saw a Rolodex on a desk? In addition to the regular march of progress, the pandemic has accelerated some trends and started new ones.

Here’s a list of workplace technology and practices that are on their way out — maybe not entirely and not necessarily forever, but the trends are clear. 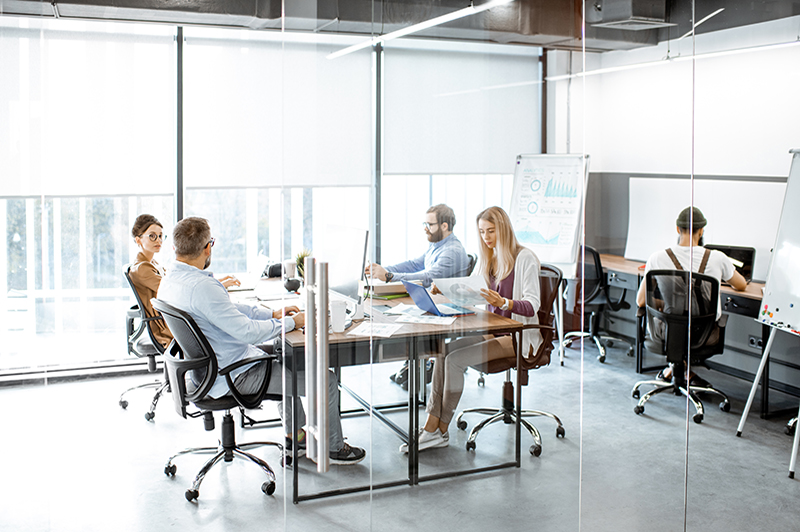 Of course, for jobs that require being physically present every day — think manufacturing, retail, food service, and others — employees will continue to live within reasonable commuting distance of the workplace where they all gather every day.

However, many office-based organizations including some of the world’s biggest companies, after seeing how effective remote teams have been throughout a year or more of the pandemic, now embrace remote hires and aren’t requiring workers to return to the office, at least not full-time. Google, for instance, says 20% of its workforce is full-time remote, with another 60% splitting time between office and remote work.

Employers willing to hire remote workers can save money on office space (and potentially salaries as well) and can fish for top talent nationwide. 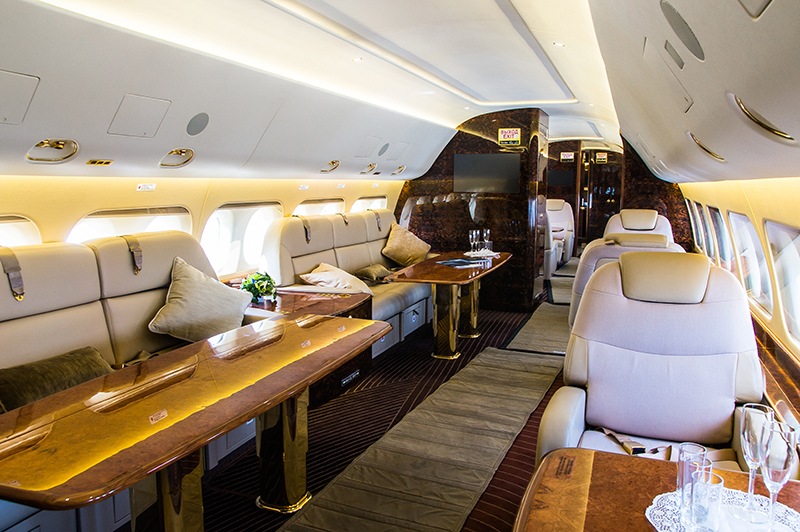 2. Corporate Jets for the C-Suite

A confluence of factors is coming for the corporate jet.

The pandemic, of course, brought business travel to a halt; even as the world opens up, some leaders have found they can get business done just as well with remote conferencing solutions such as Zoom.

And then there’s the cost of private jets. When fiscal restraint is called for, corporate jets have a big bullseye on them. JCPenney, WeWork, and General Electric are all recent examples of companies that have sold off their jets.

The final nail in the coffin will be the environment. Companies are working hard to be seen by customers as being “green.” Being bad for the environment is bad for business. And few things are more visibly off-message these days than corporate jets. A 2021 report by Transport & Environment, a European NGO campaigning for cleaner transportation, found that private jets are 10 times more carbon-intensive than commercial airliners, and create 50 times more pollution than trains. Other studies have pegged private jets as generating 20 times more pollution than taking a commercial flight. 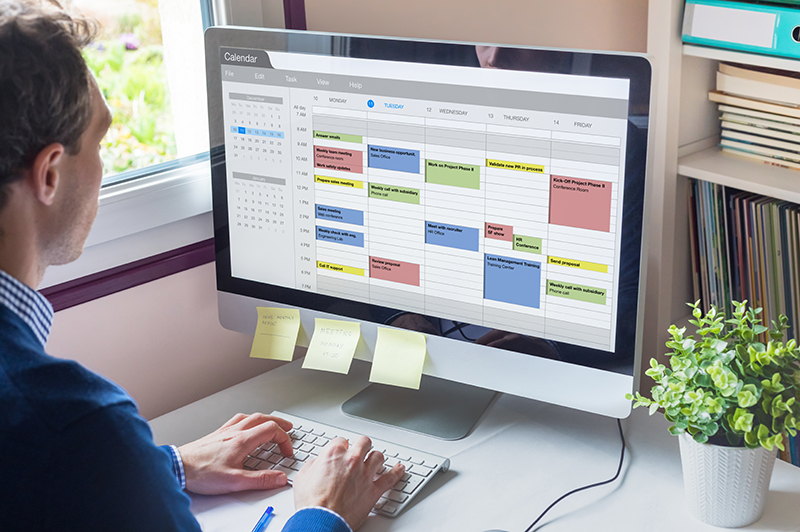 Many workers might argue that the workweek actually expanded many years ago — to a 24/7 affair enabled by email, Slack and leaders ambivalent to the concept of work/life balance.

But the real trend here is the downsizing of the traditional five-day workweek. More and more companies are experimenting with four-day weeks, either for cost reasons (sometimes reduced pay accompanies reduced hours) or in search of productivity gains and employee well-being. Sometimes, the four-day schedule simply leads to a 32-hour workweek; in other cases, employees work 10-hour days, four days a week. In fact, a recent HR Brew survey reveals that 87% of workers would trade longer workdays for shorter workweeks.

And some firms, while maintaining a five-day schedule, have altered the rules by banning meetings on one particular day each week, for example. 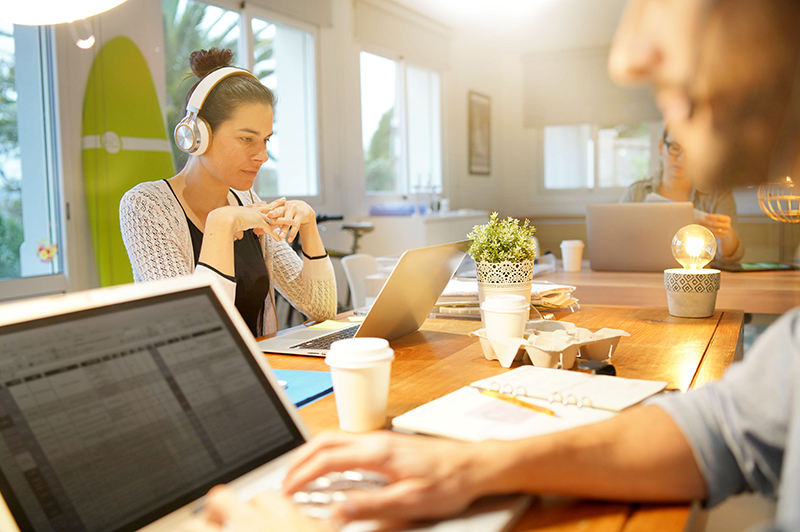 CEOs and CFOs loved open-office floor plans. Doing away with individual offices and even partitioned cubicles for most workers was seen as a big win for companies. More employees could fit into smaller spaces at lower costs. With employees sitting so closely together, open-plan offices were seen as a way to foster collaboration and productivity.

In reality, open-plan offices proved noisy and distracting. The single-biggest beneficiary of this trend might just have been manufacturers of noise-cancelling headphones. Writing in the Harvard Business Review, Ethan Bernstein and Ben Waber note that open-plan offices frequently have the opposite effect of what management intended: “In a number of workplaces we have observed for research projects or consulting assignments, those structures have produced less interaction — or less meaningful interaction — not more.”

The pandemic may be the final blow. Asking employees to sit within six feet of each other, with no dividers, and perhaps even to occupy different workstations from day to day and use shared keyboards is dangerous and uninviting. 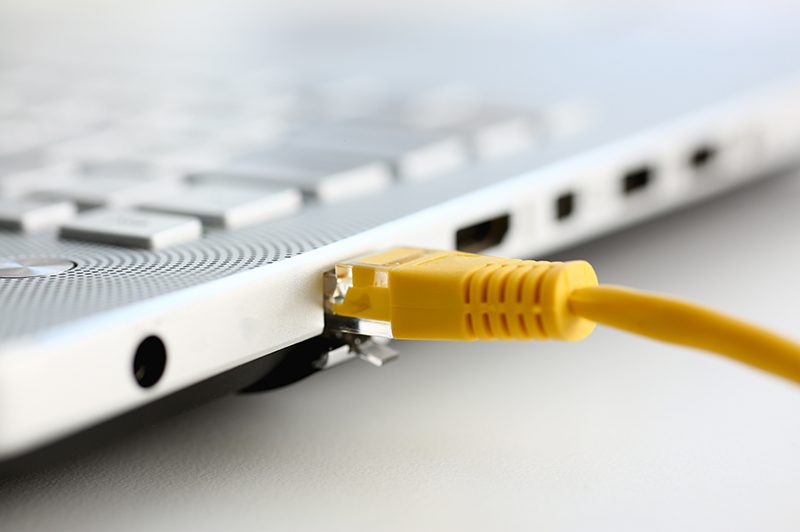 Companies have a love-hate relationship with Ethernet. The wired networking standard is relatively fast, and it’s secure. Check any desk in most offices, and you’ll find an Ethernet port nearby.

However, Ethernet has its downsides. In particular, any change in office configuration — adding desks, moving desks — requires running more Ethernet cable. It’s time-consuming and can add to clutter.

Look for private 5G networks to eventually replace Ethernet in many offices. This will provide the security needed for enterprise use, the fastest speeds possible (faster than both Ethernet and Wi-Fi), incredible flexibility with no need to run wire, support for large numbers of users and connectivity for virtually any device — especially now that laptop and tablet makers are beginning to add 5G as an option. 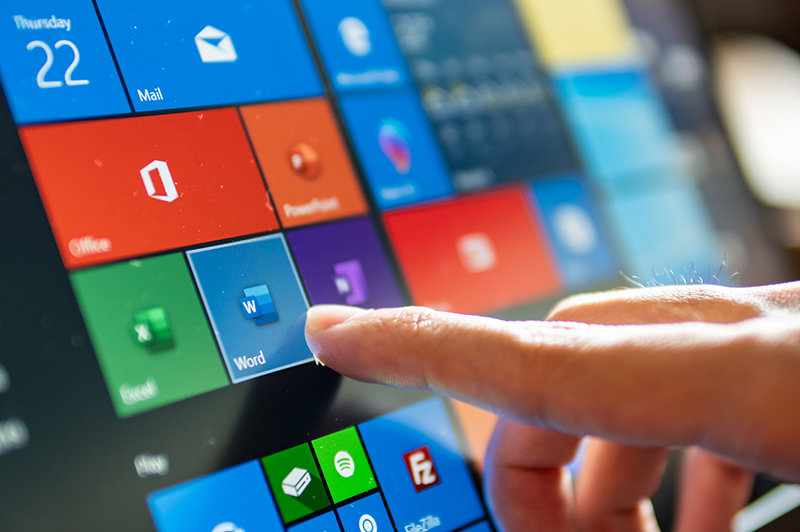 It used to be that in any office, the PCs or laptops you found could be all but guaranteed to be running two pieces of software: Microsoft Windows and Microsoft Office. This standardization made it easier on IT departments and ensured employees could work together effectively.

There is a shift underway. Google’s efforts to dominate the education channel with inexpensive Chromebooks over the past decade have paid off. Many people coming into the workforce now prefer a Chromebook over a Windows PC, and Google is encouraging adoption with enterprise tools and enterprise-rated Chromebooks. In addition, with so many services and applications moving to the cloud, Windows and expensive high-powered computers are no longer needed for many tasks. 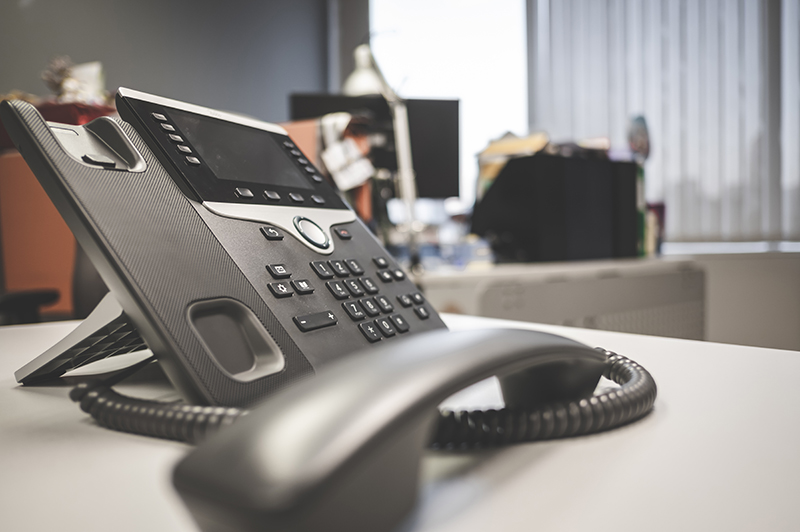 7. A Landline-Connected Telephone on Every Desk

Picture an old-school office desk, and you’ll surely imagine a typewriter and a telephone. Maybe an ashtray as well. The typewriter went the way of the dodo decades ago, replaced by a computer. The ashtray is long gone. But the telephone has remained, usually in the form of a multi-line PBX system that was still connected to an actual telephone line.

Amazingly, the big, black telephone is still likely to remain on most office workers’ desks. It’s not going to be connected to an expensive, physical landline, though. Instead, companies are increasingly migrating their expensive PBX telephone systems to cheaper VoIP alternatives. These look like the familiar office telephone, but they are entirely digital and connected to the internet. 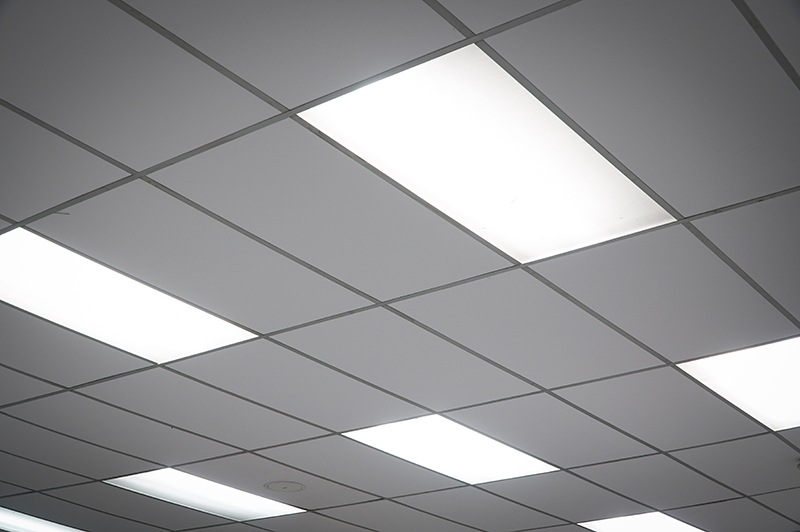 One element that’s on its way out from offices is something that few people will miss. For decades, the common thread for virtually all commercial office space — whether a small professional office or a floor with hundreds of cubicles — has been the fluorescent lighting tubes humming overhead.

Fluorescent lighting may be relatively power-efficient and inexpensive for landlords to maintain, but it’s blamed for everything from headaches to depression.

LED lighting is more economical and has the advantage of having a far wider color temperature range, but many buildings have resisted the conversion due to the cost of switching out fixtures. In 2017, 92% of commercial buildings were still using fluorescent lighting.

That picture is changing. In 2019, LED lighting outsold fluorescent for the first time. Energy Star says that wide-scale conversion of commercial building lighting to LED by 2027 would save more than $30 billion in energy costs. And if that weren’t incentive enough, studies in the U.S. and Europe have shown that switching to LED lighting improves worker performance by at least 3%. 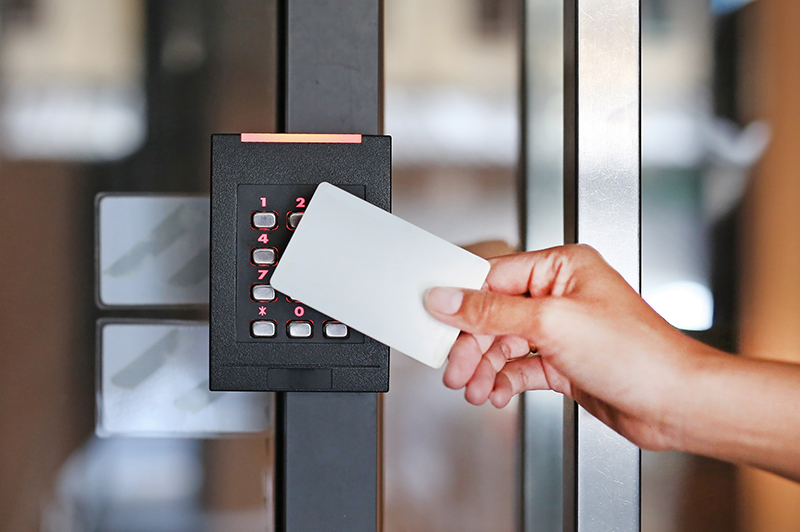 The key card on a lanyard has been an office mainstay for years. Swiping to gain access to the building, and various rooms within, has been standard operating procedure. However, swipe cards aren’t cheap (anywhere from $6 to $12 each), and you need one for every employee. Every time an employee loses the key card, that’s another $10, plus the scramble to cancel the missing card. Enabling temporary access for vendors or maintenance workers also requires issuing cards.

Instead, companies are managing office access via a device every employee, visitor and vendor is already carrying: a smartphone. Security apps are replacing swipe cards to enable access to facilities via a QR code or other methods. Dan O’Neill, president and CEO of Advanced Data Risk Management, a Woburn, Mass.-based security firm working with local businesses and Fortune 500 companies in the U.S. and abroad, suggests looking into Zerv and Alcatraz, which uses facial recognition.

The pandemic has ushered in a period where everything that can be touched must constantly be disinfected. That’s likely to be a lasting effect. Touchscreens are easily cleaned, but on/off switches and buttons are another story.

Mobile apps are now replacing everything from the start button on the office coffeemaker to elevator buttons. As an added bonus, app-based operation can capture valuable information  that can be leveraged for purposes such as safely managing passenger levels on elevators or ordering coffee supplies based on usage. 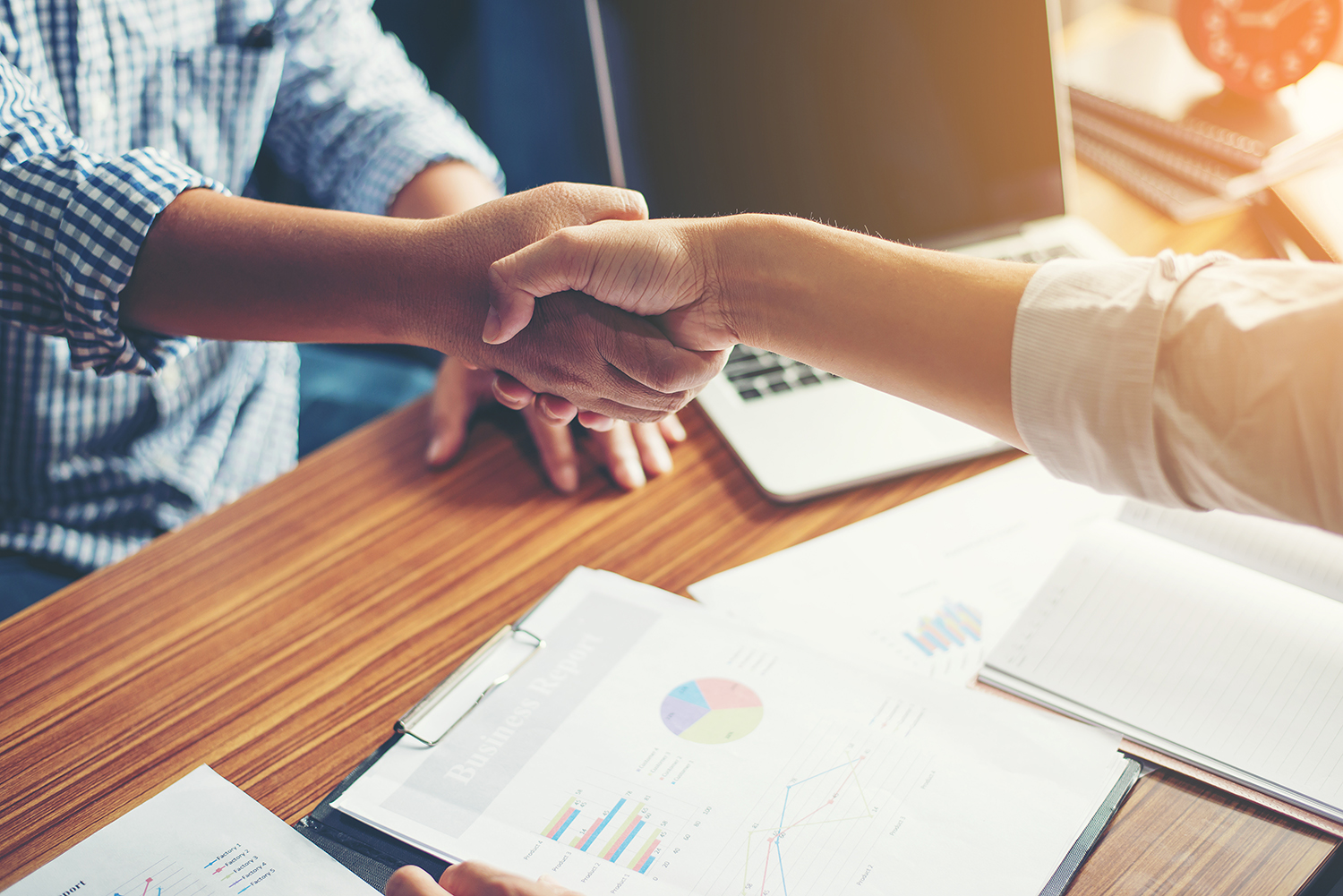 There may be no more iconic gesture in the business world than a handshake. It’s used as a greeting and, more importantly, as a closer to big new deals. The handshake has also infamously been used to assert dominance.

Thanks to the Covid-19 pandemic, after 2,500 years the handshake is on the outs. In its place, foot bumps, elbow bumps, and other gestures have become popular. The handshake may never return to its position as the go-to business greeting, at least if infectious disease specialists have their way.

Anthony Fauci, director of the National Institute of Allergy and Infectious Diseases, pointed out last year that a permanent moratorium on handshakes would dramatically reduce influenza transmission. And you might want to take the words of Dr. Gregory Poland to heart. He’s a professor specializing in infectious diseases and vaccines, and a Mayo Clinic physician: “It’s never been safe.”