How Hybrid Work Is Evolving at Cohesity

A global IT firm headquartered in San Jose, California, Cohesity has offices around the world, including in India and Ireland. But a vast majority of its roughly 1,200 employees opt to work from home.

The hybrid work environment has proven successful at the company so far. But chief human resources officer Amy Cappellanti-Wolf noted in an interview with Senior Executive Media earlier this year that it’s an evolving challenge all workplace leaders are grappling with. “Flexibility is really critical for the employee… but it makes it much more difficult in terms of, how do people feel included, engaged, part of the conversation?” she said. “Managers’ jobs are already hard enough, and now they have to balance that complexity around hybrid.”

We checked in with Cappellanti-Wolf for an update on how hybrid work has been working out for her team through 2022. Read on for an edited excerpt of our exclusive interview.

Senior Executive Media: How is the hybrid situation working at Cohesity?

Amy Cappellanti-Wolf: We decided, let’s just be flexible. Because I think, post-pandemic, people really appreciate the flexibility. So we encourage people to come in. We’ve got offices in San Jose, Raleigh-Durham, and then in India, we’ve got Pune and Bengaluru — 500 people in India in total. About 30% of the population comes in.

We’re trying to do things like Cohesity Clubhouse once a month, where people come in and we have a big meal. We watched soccer yesterday, which was lots of fun. But we’re trying to find ways to attract folks in. Our exec team will come in three days a week because we kind of felt like, if you come in, maybe your team will come in. Encourage them. So we’re still learning along the way.

Senior Executive Media: How do you encourage people to come in?

Amy Cappellanti-Wolf: For instance, we have…exec team meetings on Tuesday. And so that’s a great day to go in… I encourage my team to come in [then]… And we offer free lunch. You order it through Waiter.com because there are no cafes near us.

But I would say it’s slowly trickling in. What also helped too is we lifted any vaccine policies. After COVID went from being a pandemic to something like a flu every year, we lifted all the restrictions. We’re also gathering more in person. We had a big sales kickoff in San Diego in September. We have some big conferences like our Connect Conference in New York. So we’re drawing people together in more localized areas. And that’s bringing people out, and people really want to get out. They’ve kind of been stuck in their homes for so long.

Related article: 7 Benefits You’ll Need to Bring Employees Back to the Office

Senior Executive Media: In your last conversation with SEM, you told us about a couple things that were a “big hit” with the company. One was “refresh days,” when the whole company takes a non-holiday day off. “I think that’s a really important way for people to get a break, versus you go on vacation but your email doesn’t, so you come back to a big pile,” you said.

Another tactic you were trying was “radio silence days,” during which the company blocks off no-meeting afternoons, you said, so “you really have time to put your heads down and work.” Are you still offering both?

Amy Cappellanti-Wolf: Yes. As a matter of fact, before, we’d kind of spring it on people like, “Okay, next week or two weeks from now, we’re going to do a refresh day.” And now, at the beginning of the fiscal year, we send them out for the entire year. So everyone knows when we’re going to have the refresh days. And we try to do them on a Friday and a Monday. That way, you’ve got a longer weekend to kind of decompress. So we do that. And then [for radio silence days,] we do Wednesdays [from] noon to the end of the day, West Coast time, we have people just, you know, doing what they need to do to get their jobs done every day.

We’ve also been offering a lot more in relation to mental wellness… I just opened up a Thrive Network, which is [centered] around wellness and mental well-being. And it was the second most popular ERG [employee resource group] people really wanted to bring to bear. [Another program] we put in a lot of work on…it’s called Walk with Me. Everyone goes on a walk. You pair up, and you’re on the phone, likely on Zoom, and you just talk. It’s more personalized things that we do, things also like Community Connect, where you get groups of six to eight [people] that for 30 minutes on a Friday morning, you talk about what’s happening in your life, what’s happening with your job. I’ve hosted a couple of them. And the cool thing is that people are meeting each other on Zoom that work together but never actually made the connection on Zoom versus email. So they’ve been a great way to knit connections. 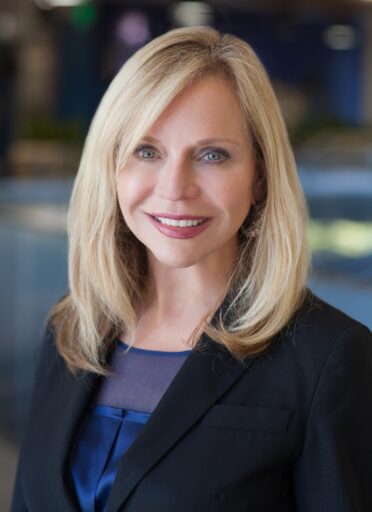 “This is the time to really start to focus on diversity because you’re small in numbers. When you get bigger, you never get the representation because a lot of numbers work against you.”

Senior Executive: How did you decide to create those ERGs and to focus on those types of benefits in order to develop this hybrid work culture?

Amy Cappellanti-Wolf: You know, we did a survey. We asked the employees, if you were going to form more ERGs, which ones would be of high interest to you? Women was a big one. The ERG that I’m on, which is the Thrive [Network]. Then we have two more we’re going to be doing — an LGBTQ+ [ERG] that we’re launching in January, and then potentially a Veterans Association because I’ve got a JAG on our team who’s our chief compliance officer, so he’s very interested in doing that. So we just heard it from the employees.

And the good news is that we have good executive sponsorship. Sometimes you have to pull the teeth of exec teams to sponsor that. So we have a Latinx [ERG] also, and our CFO is the Latinx sponsor. I’m the Thrive sponsor. Lynn [Lucas, the chief marketing officer,] is the Women’s Initiative Network sponsor. Our head of support, Karen [Egan], is our Black Cohesity Network sponsor. So we’re getting some really good leadership to help drive these ERGs.

Related article: 9 Ways to Measure the Success of Your DEI Strategy in 2023

Senior Executive: How do you guide that conversation about sponsorship?

Amy Cappellanti-Wolf: It’s been actually pretty easy here. So when I first got here — there are a lot of people that are very purpose- or mission-driven here — they were doing little, kind of grassroots things. And then when I came, I said, “Well, you know, this is the time to really start to focus on diversity because you’re small in numbers. When you get bigger, you never get the representation because a lot of numbers work against you.”

I felt really thrilled to start to plant the seeds now. And there was just a groundswell of people wanting to get involved. So we created a diversity council, which is comprised of people across the organization at all levels, as well as the executive team. Then we have three work streams that are focused on workforce, workplace, and marketplace, and those members [include] people across the organization. And so people see that happening. Plus, we’ve increased our women representation in leadership positions by 8% at VPs and above, and we’ve added 3% representation for women. We still have work to do on underrepresented minorities, but we’re seeing the groundswell of how we’re getting actual outcomes.

So the leadership team was not hard to get involved in at all… They’ve been very open. We have a new CEO, [Sanjay Poonen,] who took over in August. And the founder CEO [Mohit Aron] is still with us. He stepped into a product and support role because he loves troubleshooting… And Sanjay, who’s our CEO, is also just a huge sponsor of belonging, respect, treating people [in a way that makes this a] place where they want to come to work every day. So it’s even helping the agenda further.

Senior Executive: What else did you do specifically to drive that 8% increase in female leadership?

Amy Cappellanti-Wolf: I wish I could say I did something super strategic. I think, first of all, we built a lot of awareness. On top of that, [my opinion] has always been that if you add diversity at the top, it flows through the organization, because people want to go to work for a place where perhaps they can aspire to that someday. So I think adding…underrepresented minorities or gender at the top helps kind of 10X it and accelerate, because then we’re able to hire a peer… I’m on the C-suite. My CMO is a woman, and our new chief customer support officer is a woman. So I think that also brought more to bear. So it’s been results I never expected this quickly.

Now the big question will be, they have to stay. But so far, fingers crossed, the good news is that we’re hiring more women than we’re losing. And I’ve been on the other side of that, where you’re priming the pump and hiring them, but they’re just not sticking around. And fortunately, we don’t have that concern.